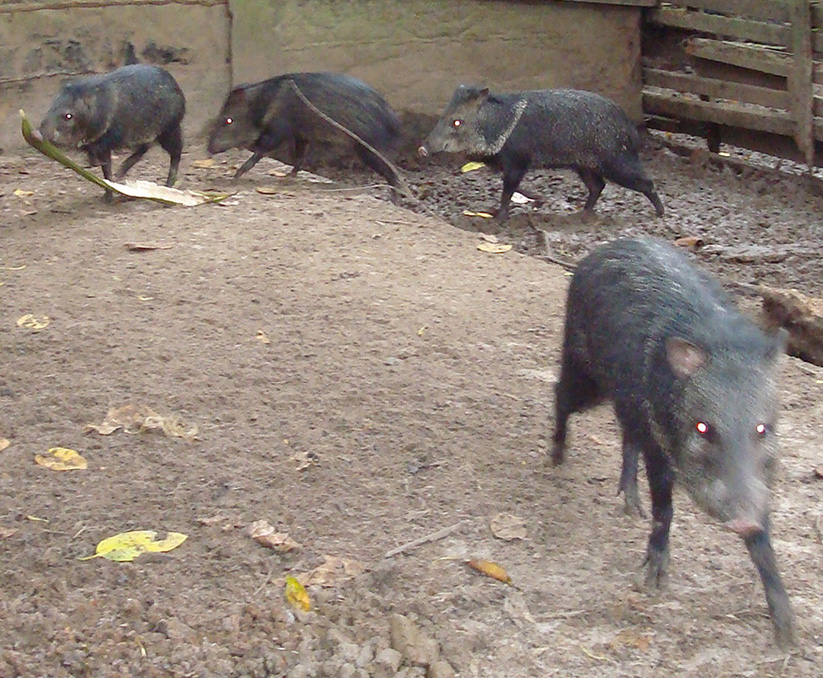 The peccary family, (family Tayassuidae), also called javelin or javelina, consist of three species of piglike mammal found in the deserts of the United States and through the Amazon in South America. Their resemblance is of wild pigs like Boars but peccaries have a dark coarse hair and a large head with a circular snout. The ears are small, as is the tail, which is generally not visible. Its spearlike canine teeth give the peccary its other common names, javelin and javelina. These teeth do not protrude but make notable lumps in the lips. In Peru, there are all three species but only two are obtained from subsistence hunting and are protected and certificated by SERFOR (National Forest And Wildlife Service) Through CITES.

Different Species And Endangered Ones

These species appear in the CITES Appendix II, except populations of Mexico and USA which are not listed, are classified as of Least Concern on The International Union for Conservation of Nature and Natural Resources (IUCN) Red List. Although this species is widely distributed, and occurs in a variety of habitats, its status requires monitoring as it is ecologically important and helps maintain livelihoods of local people. That is the reason why the Peruvian institution SERFOR keeps a yearly quota from this species to make sure the hunting does not endanger them.

White-lipped peccaries are dark brown or blackish in color. The coat is bristly, with the hairs running down the spine growing longer than the sides and forming a crest which is raised when the peccary becomes excited. The body is rounded and barrel-like, and the legs are long and slender. The face is long and ends with a pig-like nasal disc. Like the rest of the body, the head is dark brown, which makes the white markings surrounding the mouth and lower jaw stand out conspicuously.

These species appear in the CITES Appendix II, which classifies them as Near Threatened on The IUCN Red List. They face multiple threats, foremost being wide-scale habitat destruction, and intensive subsistence and commercial hunting. Throughout most of their range, they are a vital source of protein and income for local people. However, within the last century the distribution of White-lipped Peccaries has been reduced by over 21%. In Peru, these species are protected by SERFOR and their yearly quota makes sure the hunting does not endanger them.

The Chacoan peccary’s bristly coat is a speckled charcoal or brownish-grey, interspersed with long guard hairs which may be up to 22 cm / 8.8 inches long.  There is a whitish collar across the shoulders and under the chin, which is thinner and less distinct than that in the collared peccary.  There is a black dorsal stripe which trails onto the tail.  The head is extremely large, and the nose tapers to a snout disc made of cartilage.  The long, donkey-like ears are covered with long, pale hair, as are the legs.  The legs are relatively long and adapted for running, with dew claws only on the forelegs.  The dorsal gland is prominent.

These species appear in the CITES Appendix I, which classifies them as Endangered Species on The IUCN Red List. These species geographical distribution has been reduced and remaining populations are fragmented and declining- PLEASE DO NOT BUY THIS LEATHER. There is around 40% less of the Argentinian population of chacoans and it has disappeared from large areas even though the total population size is unknown to this day. Peru does not deal with this species.

The picture below is an example of the CITES certification Our company, MAPCOM SAC, do when trading or distributing peccary leather. This certificate means all the leather comes from subsistence hunting and are legally commercialized.